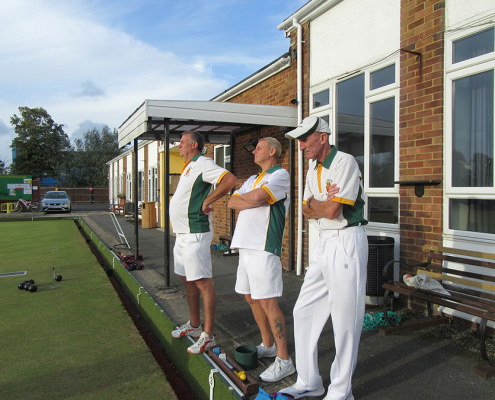 The Club was formed in 1924 and named the Southern Railway Bowling Club, Ashford.

The Secretary was G. Winder 1924 – 1965. In 1966 Alf Kemp was elected bowls sections secretary a job he did very efficiently until 2005. The club has had only 4 secretaries. The present secretary is Graham Williams from 2007.

All Club matches were played at the Ashford Town Bowling Club during the first year. They played 7 matches, winning 4 of them.

During the year a 6 rink Cumberland Turf Green (paid for by the Directors of the Southern Railway) was being laid by Neal & son. A pavilion was built for the use of refreshments and lockers. The year finished with the Club Dinner at the Victoria Hotel, Beaver Road at a cost of 4/- (20p) per head.

On 11th July 1925 the new green and pavilion were opened by Sir Herbert Ashcombe Walker K.C.B. (General Manager of the Southern Railway 1923- 1937) and Lady Walker. The first match on the green was played against the Kent County Bowling Association. No play was allowed on Sundays.

The Club has been honoured to have two county Presidents. Eric Cozens in 1937 and Vic Steeple in 1999. In 1977 7 members won County badges – a club record. Our most recent county badge was awarded in 2019.

In 1952 the Club was taken over by British Railways and renamed the British Rail Staff Association, Ashford. The Club was renamed again in 1994 Ashford (Kent) Rail Bowls Club.  2013 the Ladies and Men’s sections amalgamated.

The Club play in National and County competitions. The Shepway and District league and the Bernard Annand Trophy competition for clubs in East Kent.

Cookies are designed to help us provide the best user experience for you as well as for Google Analytics. This site uses cookies. By continuing to browse the site, you are agreeing to our use of cookies.

We may request cookies to be set on your device. We use cookies to let us know when you visit our websites, how you interact with us, to enrich your user experience, and to customize your relationship with our website.

Click on the different category headings to find out more. You can also change some of your preferences. Note that blocking some types of cookies may impact your experience on our websites and the services we are able to offer.

These cookies are strictly necessary to provide you with services available through our website and to use some of its features.

Because these cookies are strictly necessary to deliver the website, refuseing them will have impact how our site functions. You always can block or delete cookies by changing your browser settings and force blocking all cookies on this website. But this will always prompt you to accept/refuse cookies when revisiting our site.

We fully respect if you want to refuse cookies but to avoid asking you again and again kindly allow us to store a cookie for that. You are free to opt out any time or opt in for other cookies to get a better experience. If you refuse cookies we will remove all set cookies in our domain.

We provide you with a list of stored cookies on your computer in our domain so you can check what we stored. Due to security reasons we are not able to show or modify cookies from other domains. You can check these in your browser security settings.

We also use different external services like Google Webfonts, Google Maps, and external Video providers. Since these providers may collect personal data like your IP address we allow you to block them here. Please be aware that this might heavily reduce the functionality and appearance of our site. Changes will take effect once you reload the page.